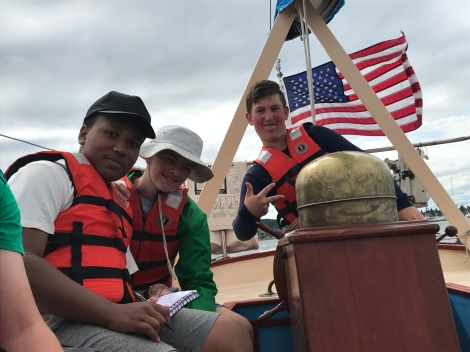 The cruise was highlighted by all sorts of wildlife:  a large unidentified whale, a pod of orcas, harbor porpoises, sea lions, harbor seals, a mother otter with three pups, deer, bald eagles, cormorants, blue herons, and seagulls.  The scouts went fishing and caught four crabs and a dogfish, but the dogfish got away.

We had “Colors” every morning at 0800, and then got underway.  The scouts stood watches and learned the duties of a lookout, how to navigate, and how to steer the boat.  They rang “bell time” and changed watch every 30 minutes.  We also performed an Admission Ceremony for the new members.

The Sea Scouts sail through the Swinomish Channel, past La Connor and on to Friday Harbor and to Sucia Island, among other stops.  Judging from the smiles on the faces….it was another great Long Cruise. 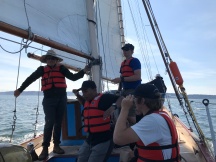 The entire crew passed off their Small Boat Handler Award, which taught them the basics about boating safety, aids to navigation, rules of the road, and motorboat operation.   They learned about anchoring and how to tie the knots required for Apprentice.  They also got to use our inflatable dinghy and outboard motor.

We finished bending on our mainsail and our mizzen and had several days under sail.  Everyone learned how to raise and lower the sails, how to tack, and how to furl.

We sang sea chanteys while we were sailing over the bounding main.  At night we read sea stories about maritime disasters.

We explored all the islands – we crawled into the China Caves at Sucia, hiked to the lighthouse on Stuart, and went swimming at Jones.  We saluted the schooner “Adventuress” and met several former Sea Scouts who told us stories.

Midway through the cruise, we stopped in Friday Harbor where we took showers, did our laundry, and went grocery shopping.  That night, we went to a Chinese restaurant for dinner, and then got ice cream for dessert.  We finished it off by going to see the movie “Dunkirk”.

Then there was galley duty.  Everyone had to do their turn cooking meals and washing dishes.  We had plenty to eat and every meal had the five essential food groups: meat, sugar, starch, fat, and preservatives.  (No self-respecting Sea Scout would ever be caught dead eating fresh fruit or vegetables – they might get scurvy!)  And of course, Long Cruise wouldn’t be complete without Red Vines, Triscuits, and Easy Cheese!

All of that for $250 per person, including food, fuel, moorage, and a movie.  Now there’s a deal you can’t beat with a stick!  When these scouts are old and gray, they will look back on the Long Cruise of 2017, and they will remember it as the best thing they ever did!

We’ll see you on the water this fall around Seattle as the Sea Scout Ship Yankee Clipper heads into its 88th year of operation.  Fair Winds!