(Brownsville, WA March 25, 2014) Mert Wells Regatta is a time for Chief Seattle Council Sea Scout Crews to shake off the cobwebs of winter and get back out on the boats, doing those things that Sea Scouts do. And that’s just what three dozen Sea Scouts and their leaders did the weekend of March 22nd in Brownsville, North of Bremerton on the Kitsap Peninsula. 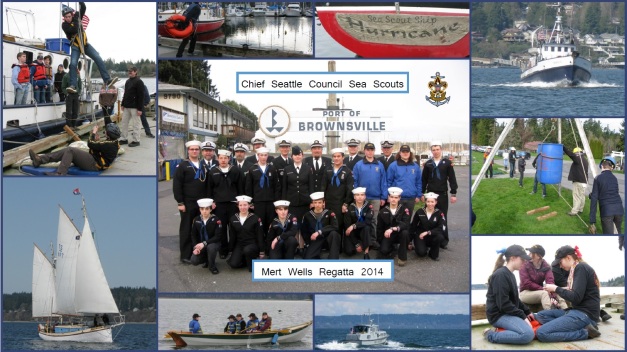 Mert Wells 2014 kicked off under clouds, but not rain at the Port of Brownsville Marina. Ships from Port Townsend, Seattle, Bellevue, Port Orchard and Edmonds in the Mount Baker Council made the trip by boat, by van and by any way they could. It was all a chance to get outside on the water, get together, and get ready for the Nor’wester Regatta which take place in Oregon late in April. Before you head to an event with Sea Scouts from Washington to California, it’s nice to take a practice run at events such as sail making, heaving line, life ring toss, and bosun’s chair lift.

The competition at Mert Wells opens with a quiz of nautical knowledge…the things Sea Scouts need to know to advance. That was followed by line splicing and sail making, piloting to test a Sea Scout’s growing navigation skills, compass cards and relative bearings test insure they know where they are going on a boat, heaving line and life ring toss insure that when they need to dock or need to get a flotation device to someone in the water they know how to get the line to land in just the right spot. Scuttlebutt is a funny sounding event, but it tests Sea Scout crews’ ability to quickly set up a block and tackle lift heavy cargo into their boats. Flotilla sounds peaceful, but when you try captaining a small rowboat giving the proper commands in the proper order to the oarsmen and women to get the boat to complete a course you realize there is a lot of skill involved. The bosun’s chair event is pure speed at getting a Sea Scout up the mast, so they can make repairs should something break. Finally there is the safety test…the quiz designed to insure that when things get dicey on a boat, these Sea Scouts can fulfill that part of the Sea Promise to “….know the location and proper use of the lifesaving devices on every boat I board.”

All those events work up a hunger. All hail the Venture Crew from Poulsbo. Once again, they came to Mert Wells provide the food for lunch and dinner. Sea Scouts have rarely seen those big hot dogs for lunch….with all the trimmings and as many as you could eat. But that was just the start. For dinner, the crews headed to the Brownsville Yacht Club overlooking the marina where the Venture crew had grilled steaks, baked potato, salad, juice and hot coco.

After that it was time to retire the colors and retreat to the yacht club for board games and laughter until lights out.

Sunday at Mert Wells starts with Flag, and adjourns to potluck breakfast with all ships contributing. But no matter what else is on the menu, piles and piles of pancakes are always flying out the galley on the SSS Propeller. No one went away hungry.

After the breakfast was put away, it was time for Scouts Own service to mark Sunday, and the awards ceremony. Everyone had fun, but someone had to be the top dog this year. This year it was Sea Scout Ship Argo of Bellevue. They tied a knot, plotted a course, and heaved a life ring just a little bit better.

Mert Wells Regatta is named after a former Sea Scout Commodore and long-time scout leader in Kitsap County. Mert Wells was a charter member of Troop 510 in Bremerton (started in 1940) and was the first committee chairman for Troop 542. He was a Vigil Honor member of the Order of the Arrow and he received the Silver Beaver Award in 1955. He attended the Colorado Springs National Jamboree in 1960. In 1968 he became committee chairman for the Sea Explorer Ship Sinclair of Bremerton, and from 1968 through 1973, he served as Commodore for the Chief Seattle Council Sea Explorer Fleet. Mert Wells passed away in 1984.

All that was left to do was sail for home and on Sunday the skies turned blue, the weather was warm-ish. The Hurricane had a downwind run home to Port Orchard and Sea Scouts from The Yankee Clipper, Propeller and Argo headed for home ports in Ballard, Lake Union and Bellevue. They motored through Agate Pass, and then danced across the waves off

Point Monroe at the North end of Bainbridge Island. While the powerboats throbbed across the water, the Yankee Clipper took advantage of a perfect 10 knot North wind to unfurl all of her sails, and leaned across Puget Sound in silence, doing what she’s been doing for 70 years…showing why there’s just something about sailing. It’s what she does.

Everything was peaceful. Until the skipper of the Propeller did what he does. Suddenly a big blue fender was tossed overboard….and cries of “Man Overboard” rang out across the deck. The next Sea Scout lesson was underway….

Look for the Chief Seattle Sea Scout fleet on the waters all around Puget Sound this Spring. We’ll be passing in review during the Opening Day Boat Parade in the Montlake Cut, May 3rd. And if you want to poke your head inside a Sea Scout Ship, the Fleet is planning a special open house at Lake Union Park in Seattle on Saturday, June 7th from 10am to 4pm. Venture Scouts, Boy Scouts and even Cub Scouts and their parents are invited to stop by to see how the wet half of the Council likes to play. 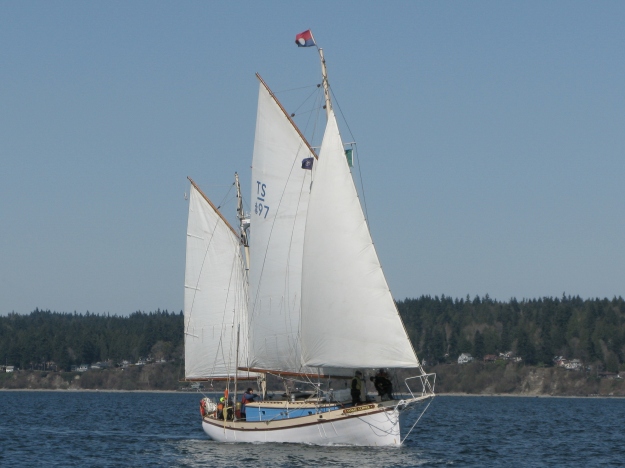