The Yankee Clipper Eastside Sea Scouts Peak Crew took its inaugural cruise on the Yankee Clipper this past weekend.  The Peak Crew, based in Woodinville, WA was formed over the winter and has been training hard for the 2014 sailing season.

There were nine Sea Scouts onboard during the weekend cruise, and for most it was their first time out on the Yankee Clipper. Up until know, the crew has been training at their Eastside base, and sailing the smaller sailboats the Chief Seattle Council Sea Scout Fleet and the Sea Scout Ship Propeller operate in Waterway 18 on the North side of Lake Union in Seattle. 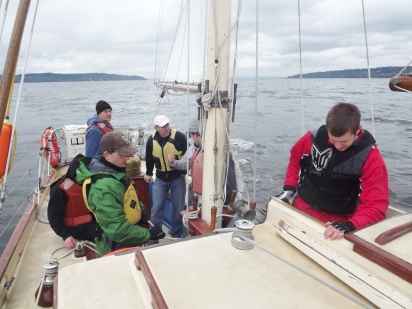 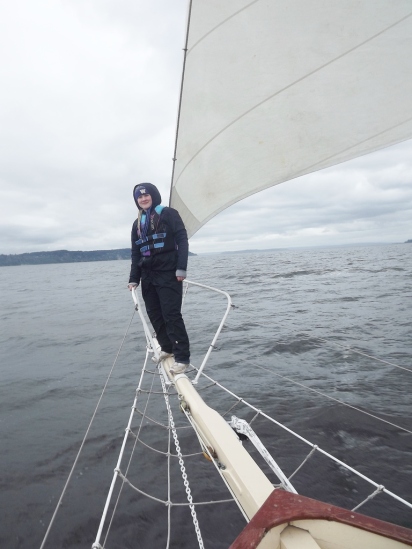 For this inaugural outing on the 73-year old gaff rigged ketch, the Peak Crew started with an overnight Friday on the dock where the Clipper is moored on the Lake Washington Ship Canal in the Seattle neighborhood of Ballard. Then on Saturday they motored through the nearly 100 year old Ballard Locks and out into Puget Sound. Once in open salt water, the new crew shook loose the mizzen, main and jib and sailed the boat North through Puget Sound, up through Possession Passage to Hat Island West of Everett.

While underway, the Sea Scouts learned to navigate, manage the boat’s systems, and operate the full sailing rig on Yankee Clipper.  In addition, the crew worked on safety drills and team building activities to build camaraderie and operational excellence among the members of the group. 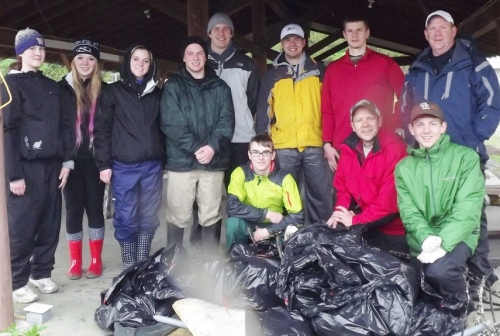 While on Hat Island, the crew broke out the plastic garbage bags and scrambled over the piles of driftwood and debris that had washed ashore over the winter. The team completed the beach cleanup community service project under supervision of the Hat Island harbormaster helping make sure the island’s beaches only have things that mother nature intends to be there

While at the dock on Hat Island Yankee Clipper Skipper Steve Grassia also conducted an induction ceremony to formally make this team from the eastside the newest members of the crew of the Sea Scout Ship Yankee Clipper.

The creation of the Eastside Peak Crew is part of the effort by Yankee Clipper leadership and willing parents to expand the number of youth who are able to take part in Sea Scouting and to expand the base of support for such a large Sea Scout vessel.  While historically Sea Scout units may have served smaller geographic areas, in today’s environment is just make sense to experiment with new models and new organizational structures and to make a valuable resource like the Yankee Clipper available to a larger group of Scouts.

The Sea Scout Ship Yankee Clipper is one of Seattle’s longest operating units of the Boy Scouts of America, providing young men and women ages 13-20 the opportunity to learn about sailing, teamwork and leadership on the water. The Clipper is chartered to the West Seattle Lions Club but has crews in both Seattle and in Woodinville. The Yankee Clipper is a 44-foot on deck, wooden gaff rigged ketch, built during World War II and converted to Sea Scout use in the early 1950s. Check us out on the web at https://seascoutshipyankeeclipper.com/ or on Facebook at: https://www.facebook.com/yankeeclipperseascouts