Seattle Sea Scout Ship Yankee Clipper was “Dressed” for the occasion when members of the 2017 crew took their ship out to participate in the parade on July 9th to mark the 100th year of of the opening of Seattle’s Hiram Chittenden Locks and the Lake Washington Ship canal.

When the Corp of Engineers open the locks in 1917 the industries of Seattle boomed with boat building, fishing, manufacturing, timber and a little known startup on Lake Union….The Boeing Aircraft Company.  In all about 50 historic Seattle vessels took to the water Sunday for a parade from Lake Union, down the canal to the locks in Ballard, and then back to Lake Union.  Three of the of the boats in the parade had made this parade once before. They where in the original parade that opened the locks 100 year ago.

With her keel laid at the Puget Sound Naval Shipyard during World War 2, and commissioned as a Sea Scout ship in 1950, the current Yankee Clipper (the unit has been in operations with other vessels as far back as the 1930’s) has traversed the Locks hundreds of times carrying young Seattle men and women to adventures all around the waters of western Washington and British Columbia. 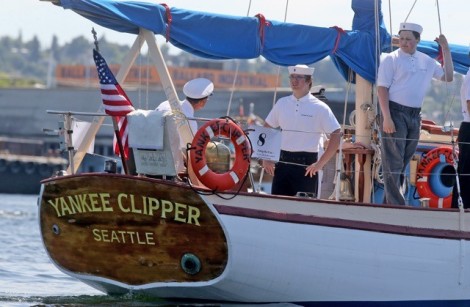 There were all sorts of dignitaries present for the parade including Washington Governor Jay Inslee and the descendants of Brigadier General Hiram M. Chittenden who oversaw the construction of the locks.  Commodore John Kelly (now age 96) was aboard the Yankee Clipper as our own special guest of honor.

It was Mr. Kelly who on returning from World War Two as a naval architect decided that the best thing to do with the old motor troop boat that the Navy had given the Sea Scouts was to make her 4 feel longer, put a deck on her, build a cabin, and…while they were at it…add masts, bowsprit and a heavy keel.  With Kelly’s design the former a motor boat becomes a gaff rigged ketch. Seattle boatwrights have spent decades following the lines laid down by Commodore Kelly to create amazing vessels.

In the last year, the Yankee Clipper has undergone extensive repairs to her aging decks to make sure that she remains in fine form to continue in the role she has filled in Seattle for decades….as the place where young women and men take the wheel from the skipper, and point her bow toward where they want to go on the water.  With newly stepped masts, the Yankee Clipper and her crew will be heading out to the San Juan Islands in August for another Long Cruise full of fun, training, sailing and memories.