When your Sea Scout Ship is 73 years young, you need to take a little extra care preparing for summer time Long Cruise.

The Sea Scout Ship Yankee Clipper is on the hard this week at Pacific Fishermen Shipyard in Seattle’s Ballard neighborhood.  We’ve been waiting all spring to get a spot on the shipyard’s busy marine railways, and we’ve been postponed several times.  But now we’re out of the water and the crews from Seattle and Woodinville are spending some time tending to the needs of their 1941 era hull in preparation for, not one, but two long cruises in August.  It’s already been a busy start to summer, and the Yankee Clipper isn’t slowing down.  Well, except for this week.

The good news is, the bottom is pretty clean.  Zincs need a little work.  The collar zinc on the shaft needs replacing, but others are still in great shape.   The shaft and propeller look great.  Next we’ll check the rudder and bearings.  The shipyard caulker is going to come have a quick look at the seams, but they look pretty good.

With the boat out of the water, our Skipper Steve Grassia is taking time to walk the Sea Scouts through the details you find on the bottom of the boat.  He’s pointed out all the through hull fittings and explained what each one does.  There’s always time for learning. 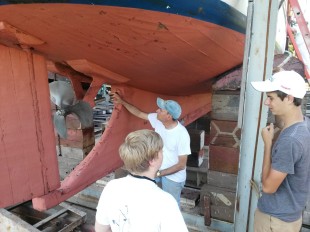 One thing we’re doing is carefully exposing any of the fasteners where we’ve seen any rust stains on the topside paint.   We’ve exposed more than a dozen, and all but one so far appear to be sound.  That’s very good news.  So what we’ll do is treat each of them with a little phosphoric acid and then wash off the rust.  When that’s dry we’ll seal the iron and wood with two thick coats of epoxy resin. Then fill flush with epoxy putty.  On that one fastener that has deteriorated, we’ll clean the iron with phosphoric acid, let it dry, then fill it flush with epoxy putty. Then we’ll drill for a new screw pilot hole about one inch away diagonally to still hit the big oak frame for a new countersunk 3” galvanized screw.  Once you cap that with a cedar plug, we’ll slick it off level with a chisel, sand smooth, put on two coats of primer, then top coat.

We also have a few spots high on the guard that are seeing a little dry rot.  Since they aren’t structural, we’ll just treat them this year, and note them for future major work.

By the end of this week we’ll be able to prep the few bare spots on the hull where bottom pain has come away, splash on new Bottom Paint, and put the old girl back in the water.  That’s not the end of the work.  We’re talking to the carpenters at the yard about helping with two projects. First we need to replace a section of the cabin bulkhead on the port side.  There’s been a water leak there, and dry rot has set in near the aft porthole.  The time has come to fix it.  We’re also hoping the shipyard crew can help us inspect and reseal the cockpit deck.  There’s some cracking in the fiberglass cover that we need to fill before winter rains return.

Then it’s on to the rest of summer in the Sea Scout Ship Yankee Clipper.