Just how much Sea Scouting can you pack into one week? That’s a question the crews of the Sea Scout Ship Yankee Clipper tried to answer the first week in July.

It all started Tuesday, July 1st when the crew hosted a class from Seattle’s Ballard High School Maritime Academy on a day sail.  The Academy team is just starting a summer session of training and an introduction to maritime technology, policy, and science.  I know, sounds a little dry when the summer sun is high, warm and bright.  But when part of that study is a day sail on an historic gaff rigged ketch, suddenly any “study” of maritime history suddenly seems a whole lot more personal and interesting.

The sun was shining, and winds where running 10 knots out of the North Northwest.  In other words, perfect conditions to make the Yankee Clipper dance.   After slipping the lines and pulling out of the dock in Ballard, the Clipper Crew quickly set up the ship for passage through the Ballard Locks.  While the Clipper Crew, Ben, Cooper, and Adam, handled the 50 foot lines that allow the ship to drop in the locks with the water level, Skipper Steve Grassia gathered the Ballard Maritime Students in the cockpit for a quick whiteboard lesson on sailboats, why sails work, sailing theory, and what the different sails and mast are called.  Once through the locks, it was out Shilshole Bay and into Puget Sound.

Skipper Steve ordered the helm to head to wind, covers off sails, and all hands to the halyards and sheets.  Sure, there was a little extra work for the BMA students to make sure they were pulling on the right lines, but the Clipper Crew was there to show the way. Soon enough it was hoist away on the Peak, hoist the throat, secure the scissors and set the sheets.  The Yankee Clipper was ready to dance.

Skipper, which is a sheet and which is the halyard? 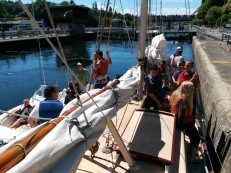 Back through the locks

Too soon it was time to put away the sails and head back to base.  But all the Ballard Maritime student had a blast, and were invited to return and consider joining the Yankee Clipper crew.  The Skipper and instructor are already talking about ways to get together with the ship later this summer and into the fall.

And that was just Tuesday.

On Wednesday, the Yankee Clipper’s Eastside Peak Crew came in from Woodinville for the first of a series of Wednesday training sails.  They’re getting ready for their first Long Cruise in August, and want to be good at sailing their ship.  One of our alternate skippers, Dick Shipley, came over from Kitsap County to lead, and quickly the crew had the boat ready for action and through the locks.  While the weather for sailing was great Tuesday, it may have even been better for the Peak Crew on Wednesday.  Mate Ben Hess says the crew had the boat back up above 7 knots (under sail) and learned more about maximizing the performance of the Yankee Clipper under sail.  As Ben says, it’s a great lead in to the 4th of July weekend. 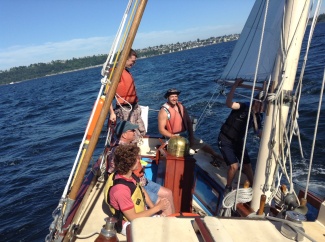 Thursday was another moving day, to get ready for the weekend. Lake Union Park was the destination as that’s where where this Independence Day weekend the Clipper will participate in the 38th Lake Union Wooden Boat Festival. Skipper Steve, the Committee Chair Dan Leach, Fleet Boatswain Adam and his sister Ashley did the moving chores, and now the boat is resting easy on the West Wall in the park for fireworks, the festival and to welcome visitors.   The Yankee Clipper has long been a regular at The Center for Wooden Boats annual celebration of boats made of wood.

All weekend Yankee Clipper Crew and Mates are welcoming guest to tour the boat, and consider if Sea Scouting might be in their future.  The crew was willing, the kids adorable, and the weather was Seattle OK.  That means, sure there were a few sputters of rain, but it was warm and very nice.  Kid had all day to crawl around the boat, talk with Sea Scouts, and moms and dads could ask questions of adult leaders.  And everyone got to see the small ElToro John Kelly and his grandson have rigged as a brigantine….the “El Yankee”