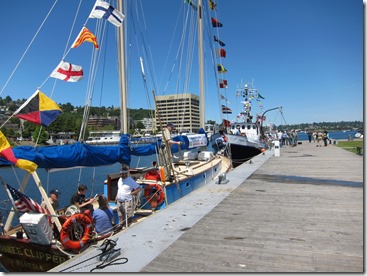 Crews from the Sea Scout Ships Yankee Clipper, Argo and Propeller tied up at the docks in Lake Union Park Saturday for a little fun and a little recruiting.  The boats arrived before 11am and set up to demonstrate skills such as ring toss, heaving line, bosuns chair lift.    Along the way there was also a little tug of war, hunkering, and just messing about with the big fire hose on the Propeller.  Useful too with all those geese in the park.  They left what we’ll politely call “their calling card” all over the docks.  So before we could welcome guests aboard for tours of the largest vessels in the Chief Seattle Council fleet, we needed the big hose for some dock cleaning.

Part of the day was also spent giving people boat rides in three of the smaller sailboats that the fleet keeps at Waterway 18 at the North end of Lake Union. There’s nothing like a free boat ride to make you think…hey I might want to be a Sea Scout and do more of this.

Mid day, a group of the Sea Scouts from all three ships went over to The Center for Wooden Boats on the East side of the park, were CWB’s Tyson Trudel was waiting to give a lesson in the finer points of Longboat rowing.  The museum has a replica of one of the longboats of the type Captain Vancouver used in 1792 to explore and map the waters of Puget Sound.

The Sea Scouts learned first hand that it takes time, patience, and a willingness to match yourself to your mates in order to find your swing, and get a 10 oar longboat moving.

But once you find it, you also realize that it’s not hard to make progress, and that by working together you can do so much more than you can on your own.   In fact, the longboat penalizes you if one person tries to pull harder or move faster than everyone else. 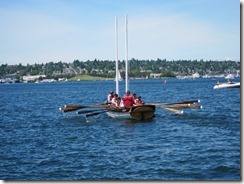 After a wrap up BBQ the crews headed off to their home ports, and a summer of voyages on Puget Sound. 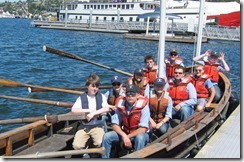