Peak Crew, Another successful weekender in the (log) book! Thanks to everyone who pitched in a made it possible.

Night Cruising: This was our first attempt at night cruising and we learned a bunch. Coming into Everett Marina under a full blanket of stars is a little more complex than it may sound. We had to study the charts and learn how to interpret the navigational markers (lights). We avoided the Navy’s restricted waters and stayed away from the shallow waters of Jetty Island. We ended up mooring at 12:30pm and everyone knocked off about 1am.

Introduction to the Fire Power of the US Navy: The Peak Crew got to tour both the USS Nimitz and the USS Rodney Davis. At one of the sailors told me…”there is no one else in the world that has ships like these or crews who can operate and fight them.” Lots learned and some good pictures. 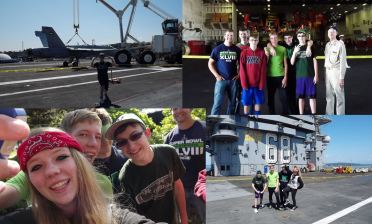 SeaScout Fun: After performing a successful anchoring operation off of Jetty Island, we announced “swim call!” While it sunny and warm afternoon, and the water looked very inviting….but it’s cold. Once the crew jumped in, they were in a big hurry to get out! The guys were in the group were particularly frustrated by the practical application of the Sea Promise line that says…”women and children first.”